We live in a culture which suggests that impossible standards and physical beauty are the norm. Most of us feel too fat, too thin or too blemished to conform with the images churned out by the media. Many of us feel self-conscious and dissatisfied as a result.
Breast size is a prime example. Breast enlargement operations are becoming much more common and sales of push-up bras are booming.

Boob boosters might be the answer. Department stores sell gel-filled breast enhancers that you tuck into your bra, which feel like real breasts. Or look for gel-filled bras.

Exercises can increase the size of the muscle beneath the breast but will not increase the actual breast tissue. There is no scientific evidence that electrical stimulation, non-hormonal creams or massage treatments have any effect.

Women with large breasts often find that they become much larger with hormone treatments, such as the oral contraceptive pill or hormone replacement therapy, or during pregnancy. This does not usually happen if the breasts were small to start with.

‘Natural’ pills to boost breast size are available in some health food stores. These often contain ‘phytoestrogens’, which are substances from plants that have an oestrogen-like effect on the body. The pills contain very large amounts (compared with the quantities of phytoestrogens we would eat as part of our normal diet). The effect of phytoestrogens on the breast needs a lot more study. Experts worry that they could encourage breast cancers, although some studies have suggested that phytoestrogens might protect against breast cancer. Whether or not these pills increase breast size is debatable.

Breast implant surgery (breast augmentation) is the only method of making breasts larger. It is obviously essential that the surgeon is reputable. Talk to your doctor about it. In the UK, it is very unlikely that you can have the operation on the National Health Service – this is normally possible only if the breast is being reconstructed after breast cancer surgery, or if one breast is very underdeveloped compared with the other. If it is to be done privately, here are some things to think about. 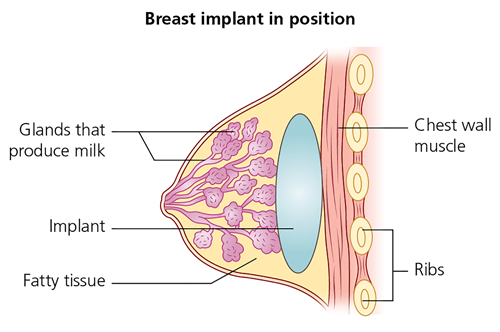 The operation. The implant is placed behind the breast tissue, between it and the chest wall muscle (although very occasionally, it is placed behind the chest wall muscle, between the muscle and the ribcage). It is never placed in the breast tissue, so it does not interfere with the function of the breast and you can breastfeed later on if you wish. The implants come in a great variety of sizes, so a correct-sized implant can be used to make your breasts look similar in size.

There will be a scar in the crease line under the breast. This will be red at first but will gradually fade over 12 months. If a saline implant is used, some surgeons will be able to insert the bag of the implant by keyhole surgery (endoscopically) through an incision in the armpit. The bag is gradually filled with saline afterwards, and this technique means there is no scar on the actual breast.
For more detailed information about breast enlargement surgery, look at the British Association of Aesthetic and Plastic Surgeons’ website.

Problems. A number of problems can occur after breast enlargement surgery.

Types of implant
Silicone-gel implants produce the most natural-feeling breasts, and are still the most common in the UK, though they have had a bad press in recent years. In particular, some people thought leakage might cause ‘auto-immune’ diseases (arthritis-like diseases such as systemic lupus erythematosus or scleroderma). In fact, all the evidence shows this does not happen and that silicone-gel implants are safe.

Leakage can, however, cause painful hardening of the breasts. In Europe, safety checks on implants were stepped up in 2003, and they now have a stronger casing to reduce the risk of leakage. If you have a silicone-gel implant, you should see your surgeon every year to try to detect leaks.
Silicone-gel implants show up as a shadow on X-rays. This means cancer cannot be detected easily by mammography in a person who has had an implant, and the breast has to be screened from special angles. If you have an implant, mention it to the radiographer.

Saline implants may be safer than silicone gel implants and are the type used most frequently in the USA, but they may leak (which will mean another operation) and may also produce a rippled effect under the skin. They cause the same difficulties with mammography as the silicone type. They do not have the same consistency as breast tissue, so can feel wobbly and strange. Some report a ‘sloshing’ sound when they jump up and down.

Soya-oil implants were used between 1995 and 1999. They are no longer used because some leaked into the breast, and it is feared that aldehyde chemicals from the oil could encourage cancers (though there is no evidence this has actually happened).

Tissue grown from our own bodies may be used as implants in the future. Researchers in the USA have taken fat cells from the thighs and buttocks and grown them on breast-shaped polymer mesh. When the mesh is full it dissolves, leaving a piece of breast-shaped fatty tissue that could be implanted.