Sperm are made in the testicles. To reach the penis, they travel along the narrow tube of the epididymis (which lies just outside the testicles) and then along larger tubes (one from each testicle). These tubes join together and go through the prostate gland to the penis. The journey distance is about 6 metres (because the epididymis tube is very tiny and tightly coiled), and can take up to 3 weeks. They are ejaculated from the urethra, the same tube that carries urine out of the penis.

Only about 5% of the seminal fluid or ejaculate (commonly known as semen) contains activated sperm; the rest is sugar and nutrients from the seminal vesicles, which lie just beneath the bladder, and the prostate gland, which surrounds the urethra as it emerges from the bladder. The fluid activates and feeds the sperm after ejaculation so that they become capable of fertilization. 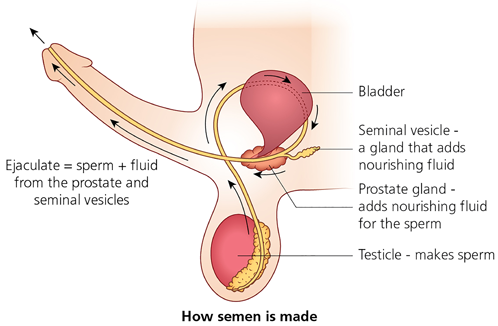 How Is Semen Ejaculated?

The sensation of orgasm is a relief of tension beginning just before the semen starts to spurt out, and ending with the final spurt – so if there is not much semen the orgasm will be short. Most men ejaculate more fluid at some times than at others – the amount can vary from a few drops to two teaspoonfuls.

Ageing is one of the most common reasons for a decrease in the amount of fluid produced when you ejaculate.

These figures come a survey published in Human Reproduction (2003;18:447–454) and they are averages, so some men in each age group will produce a lot more and some a lot less. There is nothing much you can do about this age-related decline in the amount of semen you produce – it is perfectly normal.

Backwards ejaculation. A dry orgasm (no semen) means that although you have an orgasm, no fluid is produced. One possibility is that your semen is going backwards into the bladder (retrograde ejaculation) instead of squirting out and, if you pass urine after sex it may be cloudy because of the semen. This can occur after surgery to the prostate, or with diabetes or some drugs. If you suddenly develop dry orgasm for no apparent reason, you should see your doctor for a referral to a urologist. You will need tests to see if there is a blockage in the tubes.

What You Can Do

There are two things you can do to increase the volume of ejaculate slightly:

Have less frequent sex. The survey also found that abstaining from sex increased the volume of semen produced. Men who had not had sex nor masturbated during the previous 5 days ejaculated a slightly larger volume of semen.

First published on: embarrassingproblems.com
Reviewed and edited by: Matt Brewer
Last updated: May 2021