In the UK, only men with certain conditions (prostate cancer, spinal cord injury, kidney failure, diabetes, multiple sclerosis, spina bifida, polio, Parkinson’s disease, ‘single-gene neurological disease’, severe pelvic injury) can receive any kind of NHS impotence treatment. The restrictions apply to all types of impotence treatments, not just tablets. The only exceptions are men who were already receiving impotence treatment on 14th September 1998, the date Viagra was licensed. If your erectile dysfunction is causing ‘severe mental distress’, you may be able to obtain NHS impotence treatment, but not from your family doctor – it has to be prescribed by a specialist hospital consultant. Doctors have been advised not to prescribe more than one treatment a week.

In the UK, if you are not eligible for impotence treatment under the NHS, your family doctor can give you a ‘private’ prescription. You will not be charged for the actual prescription if it is written by your NHS family doctor, but you will have to pay the pharmacist for the medication.

Many family doctors are very knowledgeable about impotence. Otherwise, your family doctor may decide to refer you to a hospital specialist called a urologist. The urologist can provide the full range of treatments, and will discuss these with you to see which would suit you best.

Avoid the private clinics you see advertised in the press. Health Which? magazine found that some private clinics employed slick salesmen and charged over £ 1,000 for a small supply of anti-impotence drugs.

And do not buy impotence treatments from Internet sites, for the following reasons.

There are many different treatments for impotence. They include tablets that you take by mouth (oral medication) and other treatments, such as injections and vacuum devices. Your doctor will help you to select the treatment that is best for you.

In the UK, there are three main oral medications (tablets), the PDE5 inhibitors– Cialis, Levitra and Viagra, which are basically similar. They prevent the breakdown of some of the chemicals in the penis that are involved in erections, so they help the normal erectile mechanism. Therefore the man becomes erect only when he is sexually aroused – unlike some other treatments, which produce an erection automatically, whether or not the man feels sexually stimulated. So these medications seem to produce a more natural erection than other methods. 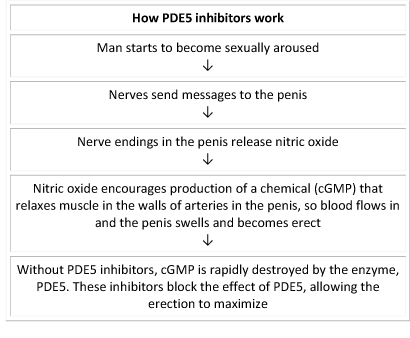 Other Types of Treatment

Penile rings (for example, Rapport RLS) are helpful for people who can get an erection but find that it does not last.

Injecting alprostadil into the penis is probably the most effective method of obtaining an erection. Alprostadil (as in, for example, Caverject and Viridal Duo) is a synthetic version of prostaglandin E1. This chemical relaxes the tiny muscles of the erectile tissue while increasing the blood supply. It is injected 10–30 minutes before intercourse. The doctor will inject the first dose and assess your erection to find the correct dose for you, and will show you how to inject yourself. You will probably be surprised how easy it is to do the injection. It should produce an erection lasting about half an hour. Occasionally a prolonged response develops (priapism). If you have a needle phobia or cannot easily see the penis, an automatic system is available (Autoject 2.25). Some pain in the penis (usually mild) is experienced by 1 in 6 men following the injection, and there might also be some bruising.

MUSE (alprostadil) stands for ‘medicated urethral system for erection’. A small pellet of alprostadil, no bigger than a grain of rice, is inserted about 3 cm up the urethra, using a tiny plastic plunger. Although it is not an injection, some men find it painful, but this discomfort can be minimized by urinating beforehand. Another disadvantage is that it makes some men feel slightly dizzy. MUSE takes 5–10 minutes to work, and the erection lasts 30–60 minutes. It does not cause abnormally prolonged erections (priapism). It is not a suitable method to use if your partner is trying to become pregnant and, if she is already pregnant, you should use a condom. If you suffer from sickle cell anaemia, leukaemia or multiple myeloma, you should not use MUSE.

Vacuum devices consist of a plastic cylinder with a pump, which may be hand- or battery-operated. A special ring is placed around the cylinder, and the cylinder is then placed over the penis. The pump is activated to produce a vacuum inside the cylinder, sucking blood into the penis, which becomes erect. When the erection is sufficient, the ring is slipped off the cylinder on to the base of the penis, to maintain the erection. The erection lasts until the ring is removed; you must remove it within 30 minutes. Vacuum devices produce a useful erection in about 75% of men, but they are cumbersome and some people find them off-putting because the penis, while erect, is often blue or mottled, and cold. They are supplied with an instruction video. In the UK, vacuum devices are now available on NHS prescription. Side effects such as bruising are uncommon.

Yohimbine tablets. Yohimbine comes from the bark of the Pausinystalin yohimbe tree, which for over a century has been thought to possess aphrodisiac qualities. Various trials have shown success rates somewhat better than the success rates from placebo (dummy) tablets, but mainly in men whose erection problems were not severe. Side effects are usually mild, but may include agitation, anxiety, headache, a slight increase in blood pressure, increased urination and stomach upsets. Also, it is not government regulated, so you cannot be certain of quality.

Surgery to improve blood supply to the penis or to stop blood leaking from it back into the body is possible in certain cases. The results are often disappointing.

Surgical implants to stiffen the penis can be inserted if all else fails, and are helpful if you have Peyronie’s disease. There are several new types, which are much superior to those used just a few years ago. Some are inflatable, and these are much more natural when inflated, and more easily concealed when deflated, than in the past.

Both inflatable and bendy implants are expensive and require surgery, but are effective, and most men who have implants are usually pleased with them (especially because the erection is immediately available). The penis is usually shorter after an implant has been inserted, because of scar tissue, and there may be some change in sensation. Implants do not affect ejaculation. The inflatables and the malleable types seem to be equally successful, though one survey showed that female partners tend to prefer the inflatable type. The main problem with the inflatable type is fluid leakage (which occurs in about 3% of men over 3 years, and will need a further operation to correct the problem) and infection (which occurs in about 3–5% of cases and usually means that the implant has to be removed).

First published on: embarrassingproblems.com
Reviewed and edited by: Matt Brewer
Last updated: May 2021