The skin is covered in hundreds of microscopic hair follicles, often known as pores, and many of these, especially on the face, neck, back and chest, are close to grease glands called sebaceous glands that produce an oily product called sebum, which flows out of the pores. These follicles sometimes overproduce cells and become blocked, trapping the sebum and preventing it from draining to the surface of the skin. Bacteria that normally live on the skin surface thrive in this oily environment. This can lead to inflammation that we all recognise as acne spots. The most common bacteria involved in acne is called Propionibacterium acnes (P. acnes).
All acne spots (also known as lesions) start out as microcomedones, which are invisible to the eye but can be seen under a microscope if a sample of acne-prone skin is examined. The different acne lesions include: 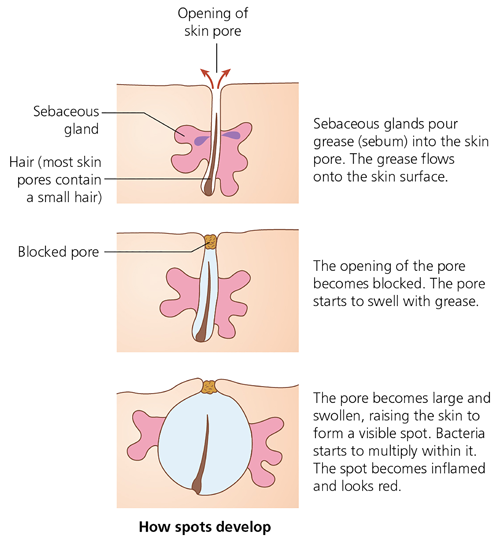 Who Gets Acne and When Does It Start?

Acne if the eighth most common disease worldwide and affects 85% of people (both male and female) between the ages of 14 and 25 years. Although acne is classically a disease of adolescence, it is now found to be starting sooner and lasting longer (not in everyone but in general). This earlier onset is believed to be due to things like lifestyle factors (such as childhood obesity), which can cause earlier onset of puberty.
Acne starts earlier in girls than boys – some primary school children will have acne spots. A rise in hormone levels in the bloodstream typically occurs before puberty. The earlier the acne starts, the worse it may become. Nevertheless, some people develop acne for the first time well after their teenage years.

How Long Does Acne Last?

Acne is self-limiting in that it won’t last forever, even without treatment. Whilst some people have a few spots for a couple of years, others can have acne for many years. Many people find their acne clears by their mid-20s but some will continue to have problems into their 30s and 40s. Persistent acne (lasting beyond teenage years) is more common in women than men and is sometimes associated with hormonal abnormalities.
Many people self-treat their acne with over-the-counter remedies and less than half present to their doctors. Delay in treatment can lead to significant problems with physical and emotional scarring. If your acne is persisting make sure you ask your pharmacist or doctor about possible treatments.

A lot of the ongoing research into acne is focusing on the bacteria that cause the inflammation. Researchers have started to look for different strains of P. acnes to see if some of these are more specific to acne and/or might cause more severe acne. Other researchers have looked at the genetic code of the bacteria and found the genes responsible for producing enzymes that might be involved in acne. The next step is to find a therapy against these enzymes. Other researchers have suggested that viruses on the skin (a type of bacteriophage) may be able to kill the acne-producing bacteria and could possibly be used as a treatment in the future.